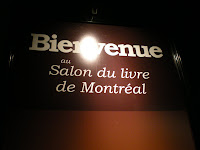 This year marks the 32nd Annual Salon Du Livre in Montreal. The event runs from November 18th to 23rd.

To describe Salon du livre is hard to put into words. Its like one massive bookstore. All kinds of french publishers and distributors gather in one huge exhibit hall and sell their books. They bring in their authors for signings and have conferences. I guess it would be sorta like BEA although I am not sure as I have never been to BEA.

This was the first year that I have gone to Salon du livre. Michael had a ped day today so we drove to the local metro (subway), parked the car and took the metro (subway) to the venue. Since Michael was under the age of 12 he got in free and that left me having to pay. I realized that on the way out that they were stamping your hand so you could back in that day you visited. 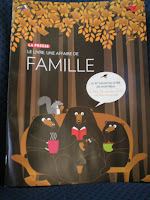 This was the booklet they handed out. Inside there was a map of the area and where all the vendors were situated, a schedule of appearances that were taking place over the six days, a list of vendors, articles and interviews.

When we got onto the exhibit floor it was overwhelming to see all the vendors set up and people. Every inch of the floor was covered.

I got to meet and talk with Nikole for quite a bit and it was really interesting to talk to her. She was like an old friend. I always tend to be nervous when I speak to someone for the first time but there was no nervousiness. It was an absolute pleasure to finally meet her and Michael was thrilled to have met the lady who sends him the books.

We talked about everything from FTC, blogging, BEA (sadly Nikole isn’t going but I really think she should go 😉 LOL) books and a whole lot more. I am really looking forward to working with her in the future. 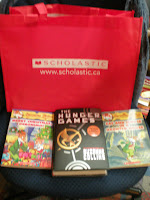 This is what I bought there:
-#03 Geronimo Stilton: Cat & Mouse in a Haunted House
-#12 Geronimo Stilton: Merry Christmas Geronimo!
(Those were for Michael)
-Hunger Games by Suzanne Collins. This was one of the books we talked about.

It was so hard to be standing in front of the English display section because they had all the books I want to read such as the Bones Series, Malise, Shiver and a few other graphic novels. I was good and only bought the books I mentioned. It helped that I didn’t have any extra cash, debit card or credit cards on me.

It was a great day and I am happy that I went.